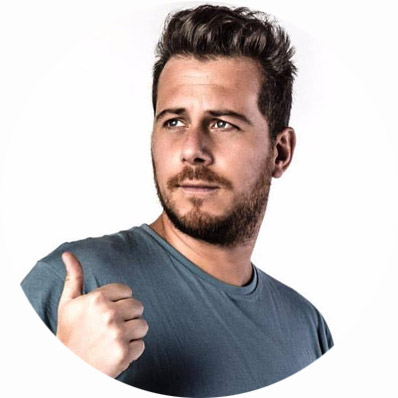 I was born 31 years ago in Como, a charming lakeside town in northern Italy.
It was late January so I had to get used to the extreme winter conditions from Day One.
When i was four years old, I was introduced to the world of computers in my father's laboratory:
first playing "Mission: Impossible" and "Prince of Persia" on Commodore 64, continuing with "The Secret of Monkey Island" and "Golden Axe" for Amiga 500 and Amiga 2000.

From that moment everything changed.

I started playing whatever was electronic: Sega Master System, Sega Mega Drive, Super Nintendo, Nintendo Gameboy, until of course the transition between 16 and 32 bits in 1995 with Sony Playstation.

The years went by playing soccer in the summer and computer games in the winter.
Having no Internet, I explored every folder and panel in Windows 95, just to see if there was something interesting that I might have missed.
I knew MS-DOS off by heart and used it to launch Street Fighter II daily.
After the turn of the millennium I got introduced to the world of Hip-hop and my first taste of the internet was downloading beats from Napster via a 56k modem… Kids of today never get to experience that sweet soundtrack of a dial-up connection.

First there was Paint Shop Pro 7, Photoshop 6.0 had seemed too complex.
I still remember my amazement when I used PSP's clone tool for the first time and I was finally able to reproduce exactly the same pixels from a source to a destination.
I eventually turned to Photoshop. The web teached me how to design and code websites. My first personal website, arrives in late 2005.
I was never motivated to try hard in school, but I never had trouble with it. In high school my lack of motivation brought headaches for my parents.
I still wanted to become a professional footballer and I spent most of my afternoons training myself, watching Dragon Ball and Captain Tsubasa and, of course, playing Metal Gear Solid, Tomb Raider, Resident Evil and so on...

In October 2006 I joined the course of "Digital Communication" at the University of Milan and I moved there. Como was far too small for my career aspirations.
In 2007 I began to get familiar with the Adobe Creative Suite and I began working as an intern in a Luxury Travel Company which allowed me to mount the shots of the trips and trasforming them into emotional videos for the travellers: yet another freezing of Sony Vegas during a rendering took me to buy a Macintosh and, finally, to stop formatting my pc once a week.
Meanwhile I left Sony Vegas for Adobe Premiere and I finished my studies and became a second level Web Designer.

In 2012 Sky Italia offered me a job as a Graphic Designer and I accepted it. I actively participated in the restyling of the portal www.sky.it, launching of Sky Go (the second most downloaded application in the history of the Italian App Store) and the creation of multimedia content for both television and web. The human relationships I have established with people in the Company have gone beyond the normal concept of colleagues: we have become a group of Friends and we see each other every day, even outside the office.
We really worked hard together but it was also great fun.

In March 2013 I left Milan and Sky to move to Switzerland: Evolve Group offered me a position as Project Manager and also made me Responsible for Photographic Post-Production in its headquarters in Lugano.
I have designed and developed multiple sites, conducted various types of multimedia projects for clients such as Alessi, Moleskine, Max Mara, Colmar, Ermanno Scervino.

2015: Adriana Online and the present

In October 2015, I wanted to embark on an ambitious and challenging start-up experience: join a highly selected team of eCommerce experts to create a leading brand in fashion and clothing in just a few years. With only 5 people, after nearly a year of development, we launched "Adriana Online" that, in its first year of life, billed about half a million dollars. In this company I have become leader of myself, I have learned all the eCommerce dynamics, from product buying, warehouse management, product system insertion, photo shooting and post-production, packaging of the received orders, collect the shipping courier and manage the customer service and the shipment.